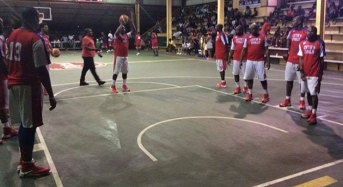 The Antigua Barbuda Basketball Association officially kicked off its 2017 season on Sunday at the JSC Sports Complex.

The day started with a short march pass inside the complex where a number of teams from the three divisions were on display.

It then continued with a brief opening ceremony where the title sponsor Digicel’s representative, Mrs. Janice Sutherland, Parliamentary Secretary in the Ministry of Sports, Sen. Collin James and President of ABBA, Darryl Matthew gave brief remarks.

In his address, Matthew highlighted the peaks of the last year of ABBA while also thanking YiDa for coming onboard to sponsor a cash prize of $10,000 for the winners of division one for this season.

Rockersville trumped Ottos,68-54 and were led by Ariel Quallis with 23 points and 9 rebounds.

Kevin Francis also contributed with 11 rebounds 6 assists and 4 steals to secure the win.

Shawn ‘Gizmo’ Williams of Full Throttle had 14 points with assistance by Kwame Payne with 10 points.

Two-time Champions, F and G Trading Cuties Ovals Ojays began their quest for a third straight title with a victory over Hometech System Outlaws in the feature match.

They were led by veteran, Marlon ‘Buju’ Charles with 18 points, 5 rebounds, 5 assists and 5 steals.

Kevin ‘Pumpkin’ Roberts had 18 points, 8 rebounds, 5 assists and 4 steals in a losing effort.

He was assisted by the 2016 Carl Knight Most Assists award recipient, Andrew Venture who had 13 points, 9 rebounds and 4 assists.