Flyers and Braves to Clash in Playoff Finals 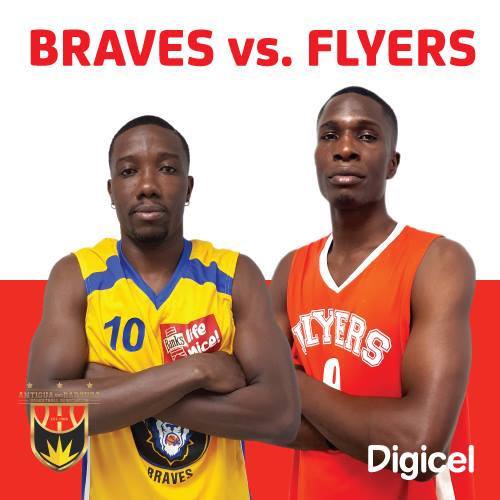 Two former champions will meet in the Antigua & Barbuda Basketball Playoff Finals slated to start this week at the JSC Basketball Complex.

Former national player, Lennox McCoy, was the best on show with 23 points and four assists for Braves while Coy Quinland picked up 16 points and seven rebounds for Stingerz.

McCoy, although confident going into the anticipated finals, said taking the young Flyers team for granted could significantly hamper their chances.

“I am not going to sit here and say that it is an easy walkover. But, however, we have our hands full, to be honest with you. The Cuban is playing very good and the more games Sharife plays is the better he becomes so we have to keep our eyes out for that, so, I am not going to [predict] a sweep but a lot of people outside are saying it’s a sweep but once we stay healthy I think we will stand a better chance,” he said.

Meanwhile, Flyers defied the odds, coming from a nine-point deficit in the third quarter to hand Ovals Ojays a four point beating [88-84] in the third and final game to take the series 2-1.

Coach, George Hughes, said he was not entirely worried over his team falling behind in the contest.

“You have to see the pulse of the game and sometimes you can’t over coach the game because they [the players] know what’s taking place too and you have to allow them to feel the pressure. But you know when to pull back,” he said.

“I just thought they needed to play a little better and I wasn’t, at that point, worried about whether or not they could come back. I just wanted them to absorb the punch from Ovals and realize they are playing a team with a lot of pride but they have to be able to withstand that surge,” he added.

Wednesday’s game one is scheduled to shoot off at 8pm.