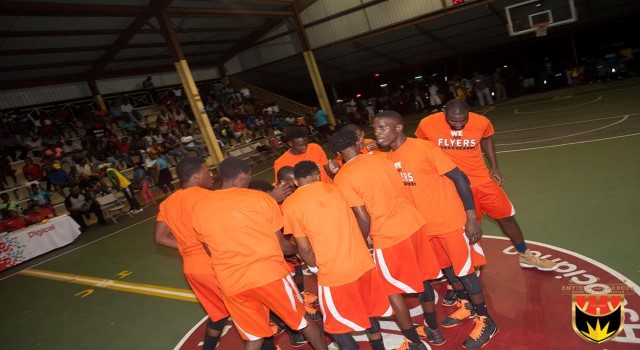 Flyers seized game one of their best-of-five playoff finals against HUF Baldwin Braves on Wednesday, beating the Antigua & Barbuda Basketball Association’s (ABBA) playoff favourites by 11 points to take command of the series.

Playing at the JSC basketball complex, Flyers outscored their opponents in all but the final quarter to take the game by an 81-70 margin.

Flyers dominated Braves, 29-21, in the opening quarter before returning in the second quarter to outshoot their opponents, 17-14. Flyers’ dominance spilled into the third quarter which they won 21-10. Braves sprang to life in the fourth and final quarter to outscore the young and energetic Flyers, 24-14.

Russell Daley led the way for the victors with 24 points.

Coach of the Flyers team, George Hughes, said he is bracing for a ramped up Braves and a motivated Lennox “Termite” McCoy for game two.

“Well, we are going to get a heavy dose of ‘Termite’ in the second game and I have no doubt of that and that goes without saying. If you know the competitor he is, he is going to be a person that is going to [push] his team but we will just have to match the intensity. He too is a pro; he knows what’s at stake, where his team is and he is going to try and take his team to the next level,” he said.

Vivian Destin was best on show for Braves, sinking 23 points and grabbing 12 rebounds.

McCoy said his team did not bring its best game but believes they will rebound in game two.

“We did not play our best game and at one point they were still up by eight points. They played a very good first quarter in which they scored about 30 points and we scored like 22 points. We did not play good, nor did we play the whole way through, but like I said, it’s a totally different team with the Spanish [player] and Sharife Sergeant; not that I thought they made such a big difference. We just did not play good and basketball goes like that,” the former national player said.

Lincoln Weeks led the way for the victors with 21 points and six assists, while Tash Harris was best on show for Old Road with 20 points and 12 rebounds.