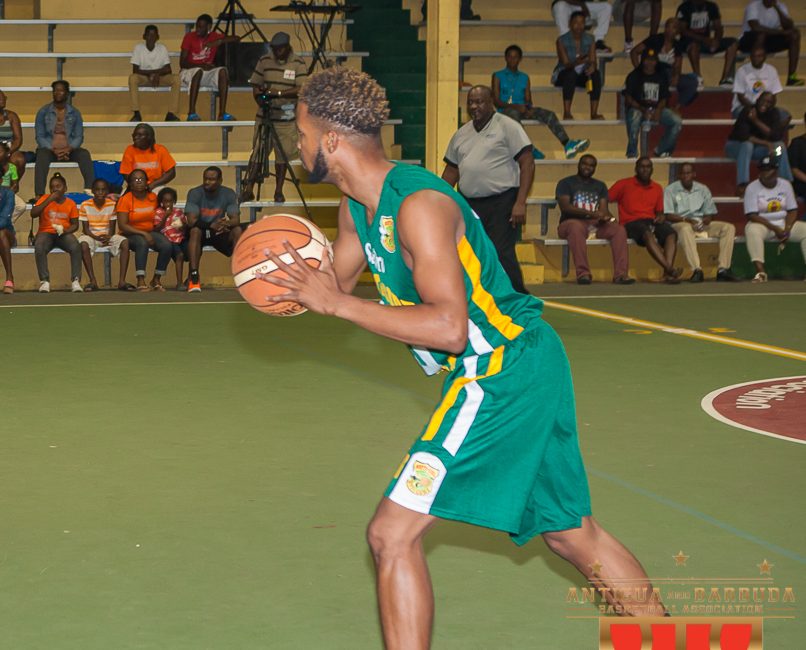 LJ Northside Stingerz pulled off the first upset for the 2017 season in Division one of the Antigua Barbuda Basketball Association league on Sunday night at the JSC Sports Complex defeating H.U.F. Baldwin Braves, 72-69 with a buzzerbeater shot.

In the Super Sunday action, the first matchup did not disappoint as Stingerz came from a 17 point deficit to give the Grays Green men their first loss of the season.

Mahijah Davis who scored the game winning basket for the Hive sent JSC into a frenzy and shattered the unblemished record of Braves.

Davis ended the match with 16 points, 11 rebounds and 4 assists in their huge victory while Coy Quinland was the leading scorer with 18 points and 7 rebounds despite being fouled out midway through the last quarter.

Chaz Samuel chipped in with 11 points and 5 assists.

Lennox ‘Termite’ McCoy who was also fouled out with approximately two minutes left in the last quarter was the leading scorer with 17 points, 9 rebounds and 5 steals.

The Orange men were neck and neck with the champs in the first half but could not maintain the momentum or stop the offensive dominance of Ojays.

Playoffs MVP, Kareem ‘Macky’ Edwards contributed with 11 points and 6 rebounds while teammates, Devorn Benjamin and N’kenge ‘Beef’ Drew chipped in with 10 points and 10 rebounds for the win.

Flyers’ Steven Matthew was the leading scorer with 24 points. He was assisted by Adonis Humphreys with 17 points and 13 rebounds and Kenya Achom with 11 points and 11 assists.

Russel Daley also had 11 points in a losing effort.

The action will continue on Thursday night as LJ Northside Stingerz will face the champions, in a finals rematch of last year, F and G Trading Cuties Ovals Ojays at 6:30pm while H.U.F. Baldwin Braves will battle Flyers Basketball at 8pm at the JSC Sports Complex.